A Guide To The Sweetest Peppers

Bell peppers are the most common type of pepper used, and they can actually be quite sweet, however, their sweetness differs.

So, which is the sweetest? 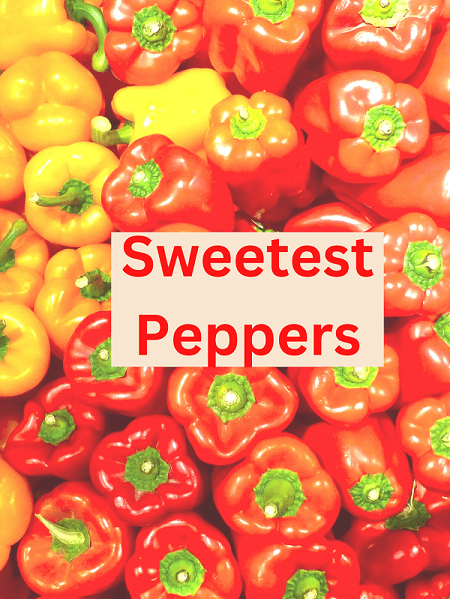 Which Bell Peppers Are Sweetest?

To answer the question quickly, red bell peppers are the sweetest – however, before we get too into all the different levels of sweetness of bell peppers, let’s remind ourselves of what the most available bell peppers are.

The color differences are an easy thing to explain. These are technical all the same pepper, you see. Bell peppers will change their colors as they ripen, the green ones are the least ripe, but red ones are the ripest, at full maturity.

This is important to know as a green bell pepper is technically unripe, and therefore it can be a bit more bitter than the other types of bell pepper. Red ones will be the sweetest as they are not fully matured.

When a bell pepper fully matures, it will contain more sugars and other nutrients than less ripe bell peppers.

Bell peppers are also nutritious as you may have guessed by now. Just half a cup of red bell peppers will give you a good 47% of your DI of vitamin A, and an insane 159% of your recommended vitamin C intake!

We will talk a bit more about the health benefits of bell peppers in a moment, but first, let’s look at which bell peppers are the sweetest and what you should be looking at on the shelves.

We won’t all have all of these bell pepper varieties available to us locally. Most of us are used to Intruder bell peppers, Yankee bells, and classic bell peppers. However, if you were wondering what you should be looking at when you buy, this should give you an idea!

It is important to note that none of these peppers will taste different when they are at the same stage, not in terms of sweetness anyway. A green classic and a green ninja will have about the same level of sweetness.

Just like a red Yankee bell and a yellow snowball. The important thing about sweetness is that they are mature. However, you may think that the darker the color the sweeter they are.

This is not true. A matured snowball is yellow, as a deep red islander is, both will be sweet, but a purple islander is not sweet.

Let’s start with a fun fact. Bell peppers are also named as being sweet peppers, and while many consider them to be a vegetable, technically they are fruit. You see, a fruit is defined by its seeds, so just as tomatoes are a reluctant fruit, so are peppers.

Bell peppers are part of the Capsicum family but they do not produce any capsaicin, so are sweet and not spicy! 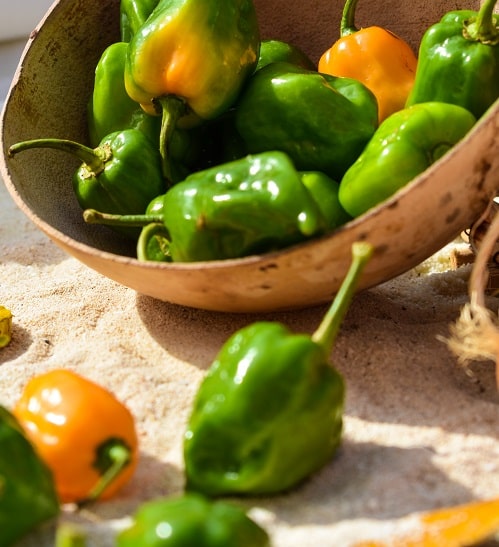 Green bell peppers are the most commonly used bell pepper much to our surprise. These are actually quite bitter as they have not yet fully matured. Therefore most people do not like eating them plain, or raw as they are not all that great to taste.

However, in spite of this, they are a very popular cooking ingredient.

Green bell peppers are not yet ripe, regardless of what type you buy. This is why a green bell pepper will taste a bit off in comparison to all the other more brightly colored versions of these peppers.

Their taste is almost fruity and they are quite sweet and still work deliciously in a lot of cooking dishes. 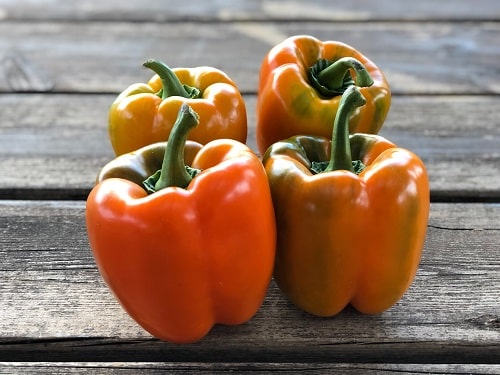 Orange peppers are not often used, and they are actually a rarer find than the other pepper colors on this list. They are much like the yellow pepper but they are not quite as sweet, although this does depend on the type of pepper you buy.

These are good snacking peppers but they also add a delicious flavor to your dishes and brighten up your plate at dinner time.

As they are totally ripe they are also more nutritious as well, packed with vitamins A and C.

These peppers also contain lycopene which is a carotenoid that can reduce the risks of particular cancers. So, if you only want to choose one pepper to add to your diet, it should be red bell peppers! 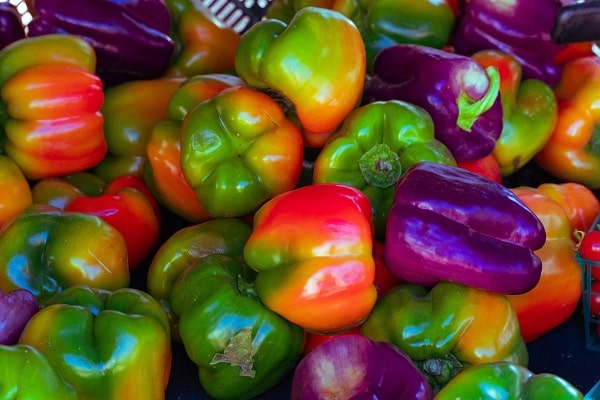 Of course, we know that there is a bell pepper that turns lavender in color and that it is not massively sweet as it is not fully matured. However, this is not the only way in which a bell pepper may turn purple.

Apparently, in some places, weather can influence a pepper’s color, and it can turn a green pepper purple.

You can also buy purple bell peppers seeds, however, we would recommend against this as they are often genetically modified and just won’t be as nice as a fresh, healthy bell pepper. If you want sweet, stick to red!

Which Bell Pepper Is Healthiest?

So, what nutrition does a bell pepper offer? Well, bell peppers are packed with:

However, as we have said, while all of these nutrients are packed into bell peppers, they are more prominent in red bell peppers, which are fully matured, than in their less mature counterparts.
So, this leads us to the conclusion that red bell peppers are the healthiest. 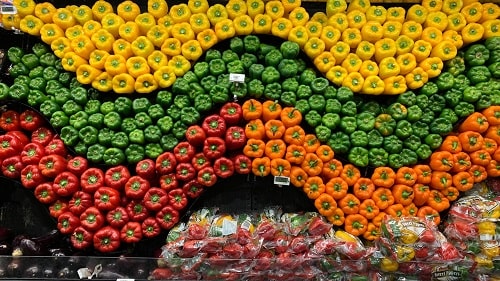 Which bell pepper is the best bell pepper to eat raw? Well this depends really, on your preferences. Most people would prefer orange or red bell peppers as they are sweeter than green and yellow and therefore are more pleasing as a snack.

However, it depends on what kind of taste you are after.

Sweet long peppers are a lot like bell peppers and they do not taste so different either. These are actually called green cubanelle peppers, or Italian frying peppers.

These are often used in cooking, or even found in snack boxes at the local superstore. They are basically long and smaller versions of bell peppers. You won’t find these in green very often though. 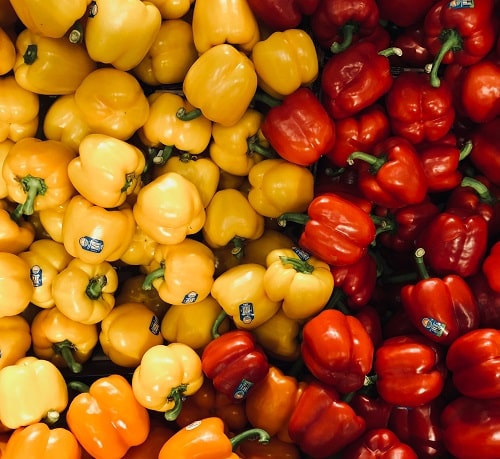 The sweetest bell peppers you will be able to get are the red ones. No particular variety is sweeter than another, but red-colored peppers are sweetest (most of the time) as they have fully matured.

If you are making a smoothie, consider using red bell peppers for a sweet but fresh addition to the flavors!

Yellow peppers are sweet, but not as sweet as red or orange peppers are, as they are not as ripe. These are ideal peppers for cooking with.

Bell peppers and sweet peppers are technically the same thing. Sweet peppers are generally called so because they are unlike the rest of the pepper family in how they lack capascain production and as a result have a more delicate, sweet flavor.

Which Pepper Is Sweeter Red Or Yellow?

Red peppers are sweeter than yellow. (unless you have a yellow one that is fully ripened.

What Is The Best Tasting Pepper?

In terms of bell peppers, red peppers are the sweetest. However, if you are asking about all peppers then the habanero pepper is the best-tasting pepper of all, but quite spicy! 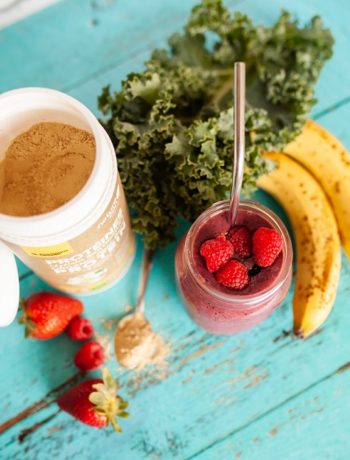 Differences Between Shakes And Smoothies: Is There A Difference? 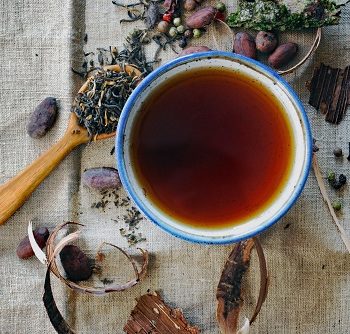 When Is The Best Time To Detox Morning Or Night 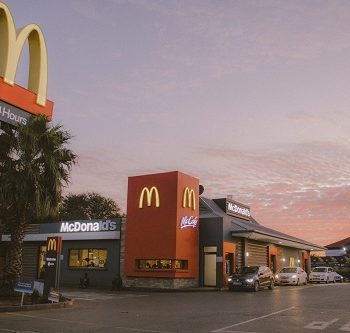 How Much Is a Smoothie At McDonald’s